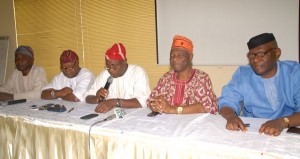 A Pan-Yoruba socio-political organization, the Afenifere Renewal Group (ARG) has scored Ekiti State Governor, Dr. Kayode Fayemi, very high in the area of execution of policies that have improved the standard of living of the people of the state.

The group said judging by the report of its Governance Assessment Committee which carried out fact-finding visit to the state and was satisfied with what it met on ground, Fayemi deserved a second term in office for the continuation of his people-oriented policies.

Addressing a news conference in Ado-Ekiti on Saturday, the ARG Chairman, Mr. Wale Oshun, enjoined residents of Ekiti to vote massively for Fayemi in the forthcoming gubernatorial election saying the number one citizen of the state “holds the key to the future peace and prosperity of Ekiti State.”

Oshun said the ARG committee believes that another term in office for Governor Fayemi “can only mean continuity of his blazing governance based on globally accepted principles of democracy and participatory governance” adding that “this will bring global reckoning and prosperity to Ekiti people.”

The ARG chief explained that it is the global practice for an incumbent chief executive who has performed well in office to be allowed to run for a fresh term allowed by the Constitution to continue the good work and consolidate on the delivery of dividends of democracy to the electorate.

He explained that with what the body has seen in Ekiti, it has reached a conclusion that “Ekiti State is ready to tap into global economy while also developing its local economies to global standards.”

The chairman of he ARG Governance Assessment Committee and former captain of the national football team, Chief Segun Odegbami, said the panel was set up on May 19, 2013 to assess the performances of Fayemi and his Osun State counterpart, Ogbeni Rauf Aregbesola ahead of governorship polls expected to take place in the two states in 2014.

Fayemi’s performance, according to him, were assessed in the areas of education, healthcare, wealth creation, infrastructure, civil service, governance and regional integration and water supply.

Odegbami, who presented the report to journalists at the news conference, disclosed that the committee also assessed the governor from the perspective of the citizens of the state in terms of the impact of his administration’s policies and programmes on the people.

He described Ekiti as a model of best practices in governance with the enactment of Fiscal Responsibility Law, Freedom of Information Law, Public Procurement Law, Gender Based Violence Prohibition Law, among others.

In the area of infrastructure, Odegbami revealed that the committee found out that the Fayemi administration has rehabilitated, reconstructed, constructed and commissioned almost 1,100 kilometers of roads out of 1,334 kilometers of federal and state roads in Ekiti.

He described Ekiti as “one state in Nigeria where all the intra-city roads are passable without a bumpy ride” adding that the Fayemi government has also commissioned several rural and urban electrification projects.

Odegbami described the investment in the Ikogosi Warm Spring Resort as “transformational” with the tourist centre now believed to be one of the best in the country.

Apart from improving access to education through the payment of WASSCE fees and reduction of tuitions payable in state owned tertiary institutions, Odegbami stated that the panel was impressed by the massive renovation of public secondary schools and distribution of 41,555 laptops to teachers and students in the state.

He added that the investment in teachers’ welfare and training and other initiatives in the education sector earned Fayemi the award of SAMSUNG Governor of the Year for Education.

The ARG panel boss noted that provision of free health services to the vulnerable segment of the Ekiti population has made healthcare assessible to the people while the ongoing renovation of General Hospitals is a commendable effort toward lifting the health sector.

Odegbami stressed that the giant strides of the administration in the health sector have engendered 40 per cent increase in antenatal attendance, reduction of infant mortality rate from 420 per 100,000 in 2010 to 135 per 100,000 by 2012.

He pointed out that vigorous pursuit of empowerment programmes has helped the Fayemi administration’s wealth creation initiatives in the areas of agriculture, especially in cocoa and cassava production.

Construction of skills acquisition centers, establishment of volunteer corps and the Youth Commercial Agriculture Development (YCAD) has trained over 5,000 unemployed school leavers while 11,000 indigenes have benefited from job creation and empowerment schemes.

Odegbami said the payment of N5,000 monthly to over 20,000 old people in Ekiti by the Fayemi administration was unprecedented in Nigeria and has saved the beneficiaries from old age poverty.

He noted that Fayemi has increased the state’s Internally Generated Revenue from N109 million he met on assumption of office to N600 million commending the governor for judicious use of state funds.