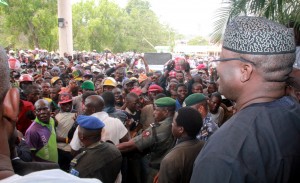 Commercial motorcyclists numbering thousands, on Wednesday, stormed Ekiti State Governor’s Office to declare their support for the re-election of Governor Kayode Fayemi ahead of the June 21gubernatorial election in the State.

The motorcyclists, popularly called Okada riders, led by their State Chairman, Mr Adebo Olu-Martins said they are giving support to Fayemi to continue “the good works” because he has transformed the transport sector by providing well-tarred road network across the State and this has made their business easy.

Olu-Martins who spoke on behalf of his association members stated that the motorcyclists are not making cheap propaganda for the Fayemi-led government but have seen for themselves what the Governor has done in the last three years; saying the efforts are very impactful.

He promised to embark on a sensitization exercise for the association to ensure that its members vote en mass for the All Progressives Congress in the forthcoming election.

The cyclists who chanted different campaign slogans such as “4+4” and “Kodurosoke”, (meaning let him remain in Office) expressed gratitude to the Governor for not banning Okada transport in the State.

“We are here to pay a visit to the governor, to thank him for confirming the fact that he is not banning okada in Ekiti State. We appreciate him for the construction of good roads because that is what is most important to our constituency, since we use the roads. This gives our tyres lasting period before wearing out.  My people are giving support to what is good because they have seen it themselves and it is not propaganda. The works of the governor all over the state are visible. No community that has not felt the impact of the government”, he said.

Responding , Governor Fayemi debunked rumours of banning Okada after re-election but stated that he had only urged the riders to reduce their speed while plying the road to avoid unnecessary accident on the roads.

He added that the rumour was peddled by his detractors who are trying to get undue favour from the motorcyclists ahead of the election.

Governor Fayemi who reiterated his administration’s commitment to making sure that the state is transformed for the betterment of the masses thanked the Okada riders for supporting him in rescuing the state from the grip of ‘political locusts’ right from the beginning of the struggle in 2007.
The governor promised more largesse for the motorcyclists in the provision of a bus and helmets for them to ensure their safety while conducting their businesses.