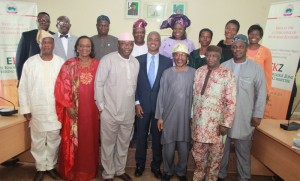 The Ekiti State Government is poised to take an innovative step that is aimed at breaking its dependence on allocation that accrues to it from the federation account by switching from a resource-based economy to a knowledge-driven economy.

This was why the State Governor, Dr Kayode Fayemi yesterday inaugurated an 11-man steering committee of the Ekiti Knowledge Zone(EKZ) to look into the exploitation of the human resource which the State takes pride in and transform its economy through the human capital.

Inaugurating the steering committee in Ado Ekiti, Governor Fayemi explained that the Knowledge Zone was created because the State needs “to step out of the shadows, let go of yesterday’s strategies and leap into the future with new processes, new approaches to solving our problem”, making Ekiti survive and thrive in today’s global economy.

The Governor added that it was a logical choice to turn to knowledge as the primary product in which the State can successfully trade since it is faced with the challenge of how to effectively transform its agrarian economy and convert the intellectual Capital to prosperity for the people of Ekiti.

“This administration is committed to converting its brain into brawn for the people by accelerating development, skipping less efficient routes and moving directly to more advanced stages such as a knowledge-based economy – a system of consumption and production that is based on intellectual capital rather than on physical inputs or natural resources. Hence, we would develop our economy by trading skills and activities in which our constituents are well versed in”, he said.

The State, according to Fayemi, is toeing the path of Malaysia which economy in the 1960s was similar to that of Ekiti but got transformed through knowledge.

Justifying the choice of Knowledge Zone, the Governor stated that according to KPMG Australia, Nigeria is at an advantage and provides an opportunity for Ekiti in particular to position itself strategically to attract the attention of Investors; saying that with the reputation of Ekiti as a leader in the production of superior intellectual Capital, the State can convincingly position itself as and effectively evolve into a knowledge-based economy.

“The EKZ is conceived to be a place where we can match Ekiti’s global repertoire of Academic Experts and pioneers with platinum players in the industrial and scientific community, cross-fertilize revolutionary ideas and produce innovative concepts, products and services that will positively impact the state, our nation, sub-Saharan Africa and by extension, make conscious, holistic contributions to the advancement of humanity”, he added.
Fayemi charged members of the Steering Committee to be single-minded in the goal of delivering first-class results that are of international standards and also reflective of the Ekiti spirit.

He spelt out the committee’s terms of reference to include studying and advising the Ministry of Trade, Investments and Innovations on the most appropriate model or hybrid model best suited to deliver the Programme objectives in Ekiti; reviewing current Trade Zone Legislation at State, Federal and international levels and advise the Government on creating an enabling legislative environment for the EKZ, and advising and providing guidance to the Ministry of Trade, Investments and Innovations in developing different categories of Agreements with Partners and Investors in the EKZ Programme.

In his remarks, the Chairman of the Committee, Dr Tunji Olowolafe pledged the committee’s readiness to deliver on the terms of reference as well as help in transforming the State’s economy such that it becomes one of the leading in Nigeria.