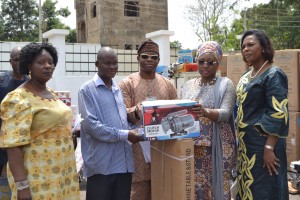 Wife of Ekiti State Governor, Erelu Bisi Fayemi, has distributed another set of empowerment materials worth over N5m to 108 People Living With HIV/AIDS in the state.
The First Lady, who is also the Chairperson of Ekiti State AIDS Control Agency, said the gesture underscored the commitment of the state government to giving the beneficiaries a new lease of life.
The exercise, which was the third since the Governor Kayode Fayemi-led administration came on board, took place at the Office of the Wife of Governor, on Wednesday.
The beneficiaries, who converged under the aegis of the Network of People Living With HIV and AIDS in Nigeria (NEPWHAN), received deep freezers, computer sets, video cameras, sewing machines, grinding machines, photocopy machines and clothing, among other items.

The EKSACA boss pledged the continued support of the government for the NEPWHAN members to live a meaningful life, adding that a lot more was being done to reduce the HIV/AIDS prevalence to the barest minimum in the state.
She said, “When I became the Chair of SACA, I insisted that in everything that we do around HIV/AIDS in Ekiti state, we should ensure that we empower people who are living with HIV/AIDS and we should be able to tell people that being HIV positive is not the end of the world.
“We need to be able to set an example and demonstrate practically what it means to be living with HIV/AIDS and still have hope. Testing positive is not the end of the world.”
She appealed to those yet to know their HIV status to visit the nearest health facility and submit themselves for testing and counselling.

She added that the state government has provided free medical care for the people living with HIV as part of measures to mitigate the challenges confronting them. She stressed that the measure has resulted in tremendous improvement in their life expectancy.
Erelu Bisi Fayemi said, “If you are living with HIV/AIDS and you have access to good medical care, nutrition and have a means of livelihood, you can live for as long as God has designed for you on earth.”

She thanked the state government and SACA management for their efforts at ensuring better living standard for the people living with HIV/AIDS in the state.
While wishing the beneficiaries well in their endeavours, the governor’s wife charged them to use the materials to maximum benefits to care for themselves and their families.
The Project Manager of SACA, Dr Charles Doherty, said the distribution of empowerment materials to NEPWHAN members was part of efforts of the government to reduce poverty and death among them.
He said, “The beauty of this exercise is that one of the NEPWHAN members supplied all the items being distributed today. This in essence means that 109 people were empowered today.”