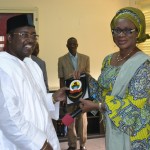 The Ekiti State government has announced a N5 million lifeline for the permanent Orientation Camp of the National Youth Service Corps (NYSC) at Ise/Orun/Emure-Ekiti.

Its gesture came on day the Chairman of NYSC Governing Board, Chief Gordon Bozimo  led a delegation to the Office of the Deputy Governor, Prof Modupe Adelabu in Ado-Ekiti, the state capital.

Chief Bozimo had appreciated the existing cordial relationship between the state and the NYSC after which he presented a fresh shopping list to her host for possible assistance.

The NYSC chief also thanked the state government for periodic upgrading of the infrastructural facilities on the extension of logistics supports.

In her response, the deputy governor said the cash donation will go a long way in the expansion of the Multi-Purpose Hall at the camp and the provision of additional beddings for Corps members deployed in the state for the compulsory one-year service.

Mrs. Adelabu, who acknowledged the significant contributions of corps members to the educational and economic development of the state, said no amount was too much for the comfort of youths serving their father’s land for free.

Explaining that the government in Ekiti had always extended a helping hand to ensure the success of the NYSC programme in its domain, the deputy governor listed the regular renovation and upgrading of facilities on the camp.

Mrs Adelabu, who said the recent donation of one 18-seaters Toyota by the Governor Kayode Fayemi administration was a demonstration of the state’s commitment to the NYSC ideal, assured that the scheme will continue to enjoy support of the state government.

Her words: “The government is not unmindful of the numerous challenges of the NYSC which resulted from the yearly increase in the population of graduates who are due for the compulsory youth service programme. I assure you that our government will not relent in providing the necessary assistance.”

Speaking earlier, Chief Bozimo acknowledged that the government has never shied away from supporting the NYSC scheme. He said Ekiti, like other states, has been a driving force for the actualization of the NYSC objectives.

He commended the state for the provision of a permanent camp site for the NYSC, adding that the extent of the infrastructural development that has taken place in the camp has clearly shown the commitment to the success of the programme.

According to him, Ekiti ranked among the best states when the welfare of corps members enjoyed priority of their hosts, pointing out that the meal subsidy being provided for corps members as well as the State Honours’ Awards and the automatic employment being offered to deserving corps members at the end of their service year were elixirs and source of encouragement to youths.