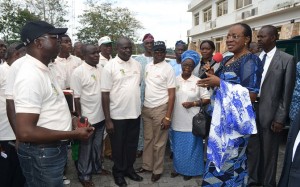 Ekiti State Deputy Governor, Prof. Modupe Adelabu (holding the microphone) addressing the Pharmaceutical Society of Nigeria (PSN) who paid a solidarity visit to the deputy governor in her office in Ado-Ekiti.

Ekiti State government yesterday renewed its commitment to good healthcare delivery and affordable services to residents in all its health institutions.

Deputy Governor Prof Modupe Adelabu made the assertion while hosting members of the Ekiti State University Teaching Hospital chapter of the Association of Resident Doctors (ARD) and the state wing of the Pharmaceutical Society of Nigeria (PSN).
The bodies were hosted in the Conference Room of the the deputy governor’s office separately.
Dr Oluwole Alese led the ARD while Kolapo Olatunde led the pharmacists who were on an enlightenment walk on the streets of Ado-Ekiti, the state capital to celebrate their week and the World Pharmacists’ Day.
According to the deputy governor, ‘Heath Care Services’, which is agenda five on Governor Kayode Fayemi’s Eight-Point Agenda and Road Map to Ekiti Recovery, was being vigorously pursued by the government.
She noted that the strategic implementation of the health programme was key to the overall success of the Eight-Point Agenda.
Her words: “Our target is to create wealth by eliminating poverty and you cannot create wealth without good health.”
The deputy governor told her guests that the Fayemi administration was trying its best to make the state  a reference point in healthcare delivery with the various services, which she listed as; the free health mission in all the local government areas, the Ilera l’aafin Health initiative for monarchs.
Mrs Adelabu also noted that the ongoing renovation of all the general hospitals in the state and the provision of ultra-modern facilities at EKSUTH were make healthcare services readily available to residents.
The deputy governor assured that government will continue to provide conducive environment for health personnel to ply their trade, urging the doctors and pharmacists to collaborate with the administration.
Admitting the relationship of doctors and pharmacists in the prescription and administration of drugs to patients, the deputy governor hailed the PSN members for going beyond manufacturing but monitoring and regulating drug usage.
She said the government was not opposed to exchange programmes for resident doctors as such exposure would enable them to import experiences which they would on the long run domesticate.
In his remark, Dr. Alese lauded the efforts of the state government in the health sector, particularly at making healthcare services readily available to all Ekiti residents irrespective of where they live within the state.
He expressed the readiness of resident doctors, who he described are doctors undergoing training in special medical fields, to assist in improving the health indices in state.
According to him, the services being rendered by the ARD will tremendously shore up life expectancy and reduce child and maternal mortality rate.
Also speaking, the PSN chair said his members were on street walk to sensitise residents on the right use of drug as part of events lined up to mark the World Pharcisits’ Day and the PSN Week in the state.
Olatunde informed the deputy governor that his association has been collaborating with relevant regulatory bodies including the National Drug Law Enforcement Agency NDLEA) and National Agency for Food, Drug Administration and Control (NAFDAC) among others.