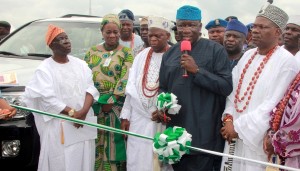 Presenting the vehicles at the Oluyemi Kayode Stadium, venue of the inauguration of the reconstituted Council of Traditional Rulers chaired by Oba Adamo Babalola, the Onitaji of Itaji Ekiti, the State Governor, Dr Kayode Fayemi, said the gesture was a re-assurance that his administration would make the welfare of the monarchs utmost priority within available resources.

Dr. Fayemi explained that the vehicles were given out in recognition of the crucial roles which traditional rulers play in the affairs of their communities and the state, as well as the need to accord the traditional institution the dignity, prestige and honour it deserves.

Governor Fayemi who assured that government would not relent in improving the quality of lives of the citizenry in line with the well-spelt out 8-point agenda, asserted that all the efforts are geared towards making life more meaningful for people and banishing poverty from the State.

On the reconstitution of the 56-member Council, Fayemi expressed his respect for the traditional institution even as he opined that the council would build on the legacy of the predecessors and help consolidate on the “bottom-top participatory governance model” of the Fayemi-led administration.

The Governor said: “The new Council consists of 56 members under the Chairmanship of His Royal Majesty, Oba Idowu Adamo Babalola, the Onitaji of Itaji Ekiti. The tenure of the new council whose effective commencement date is 1st August 2013, and which is being formally inaugurated today, is for a period of two years. I want to emphasise that the membership of the Council is based on institutions and not individuals holding the titles”,

The Governor also directed the Bureau of Chieftaincy Affairs to work out modalities for the maintenance of the vehicles.

Before being chauffeured out of the venue in their respective new vehicles the visibly elated obas prayed for the success of the second term ambition of the Governor, Dr. Kayode Fayemi, to sustain the development being witnessed in the state during his tenure.

All the obas on their seat had  prayed collectively raising their ‘irukere’ (horsetail) to invoke the blessings of their ancestors on Dr. Fayemi’s bid for a fresh term of four years in office and the sustenance of the success already recorded in the last two years and ten months of his administration.

The new chairman of the Obas’ council, in his speech specifically prayed that “God will grant Governor Fayemi the privilege to spend the two terms permitted by law in office”.

Oba Babalola also pledged his loyalty and allegiance to the Fayemi administration and urged the civil servants and all the people of the state to cooperate with the Governor in his determination to “lead Ekiti to the Promised Land”.

While thanking the Governor for appointing him to his new office, Oba Babalola also prayed that Ekiti will continue to witness more peace, progress and development with the cooperation of the traditional rulers.

The immediate past chairman of the state traditional rulers’ body who is also the Owa Ooye of Okemesi-Ekiti, Oba Gbadebo Adedeji, stressed that the Governor has succeeded in using his eight-point agenda to improve the welfare of the people of the state.

Oba Adedeji noted that Governor Fayemi had in less than three years achieved many firsts which had made his administration to be unique in the state.

According to Oba Adedeji, some of the firsts recorded by Dr. Fayemi included the introduction of electronic payment to all categories of public servants which had eliminated fraud in the system, payment of monthly stipends to the aged people in the state, distribution of laptops to students and teachers in public schools, among others.

The Okemesi monarch pointed out that with the presentation of brand new vehicles to Obas in the state, “the era of rickety Tokubbo vehicles for traditional rulers has gone for good”.

Shortly before inaugurating the council, Dr. Fayemi described the event as the beginning of another era in the administration of the traditional council in the state.

While restating his great respect for the traditional institution, Governor  Fayemi described Ekiti Obas as ” knowledgeable, wise, dedicated and intelligent” appreciating their support for his administration since he came into office.

The Governor used the event to appeal to the people of the state to always resolve chieftaincy disputes amicably calling for an end to court battles over traditional stools.

He explained that the purchase of brand new vehicles for the royal fathers was borne out of the need to give them an opportunity to perform their functions with respect and dignity.

The Special Adviser on Chieftaincy Matters, Chief Aderemi Ajayi, promised that government will do everything possible to collaborate with the monarchs to ensure the maintenance of law and order in the state.

Ajayi stated that the support of the royal fathers had assisted government to deliver dividends of democracy to the people of the state.