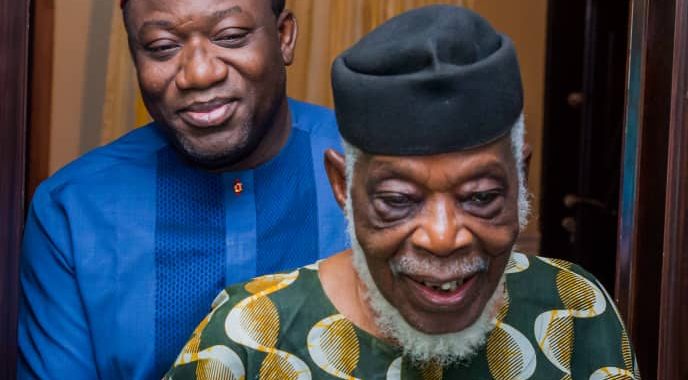 The Governor of Ekiti State, Dr. Kayode Fayemi, has described the late Afenifere leader, Senator Ayo Fasanmi, as one of the heroes of democracy being enjoyed in the country today.

Dr. Fayemi in a statement by his Chief Press Secretary, Mr Yinka Oyebode, described Pa Fasanmi as a steadfast Awoist and committed progressive who was a torchbearer for younger progressives in his lifetime.

The Governor said the death of Fasanmi had robbed Nigeria of one of her most selfless politicians and patriots who demonstrated unalloyed commitment for a better country where justice and equity occupy a pride of place. He noted that Pa Fasanmi was a politician who was consistent with the progressive ideology as demonstrated in his membership of the Action Group, Unity Party of Nigeria, Social Democratic Party, Alliance for Democracy, Action Congress, Action Congress of Nigerian and All Progressives Congress.

The Chairman of the Nigeria Governors Forum (NGF) said Ekiti is proud to have produced Fasanmi who served as a parliamentarian at different times in the House of Representatives and the Senate. Fayemi recalled the pivotal role played by Fasanmi as a chieftain of the National Democratic Coalition (NADECO) in the fight to revalidate the June 12, 1993 presidential election won by the late Chief M.K.O. Abiola.

He said the late Pa Fasanmi demonstrated courage in his stand against military dictatorship at a time it was very dangerous to dare the most vicious dictatorship in the nation’s history. The Governor described Pa Fasanmi as a renowned Pharmacist who made a name in the profession leading to his emergence as the National President of the Pharmaceutical Society of Nigeria (PSN) in 1977.

Fayemi said all these sterling qualities exhibited by Fasanmi informed the decision by his administration to name one of the four new secondary schools in the state capital after the late elder statesman in 2019. He expressed fulfilment that Pa Fasanmi was alive to witness the enthronement of a government of the progressives at the federal level for the first time in the nation’s political history in 2015 and was also consistent in advocating for President Muhammadu Buhari’s re-election in 2019.

The Governor who said that Fasanmi lived a fulfilled life urged contemporary politicians to imbibe the ideals of service, sacrifice, humility, altruism and patriotism of the late elder statesman.

“Our highly revered Pa Fasanmi lived a good life, ran a good race and has gone home for a well deserved rest.

“There is no doubt we shall miss his wise counsel, but we are consoled with the fact he lived a good life and left a good legacy. Our prayer is that God will grant him eternal rest and comfort his family.” He said.