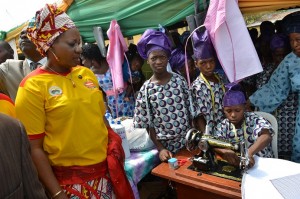 Ekiti State Government yesterday renewed its promise to equip pupils in public primary schools with the required entrepreneurial skills that will make them self-reliant and productive members of the society in future.
The renewal came as pupils drawn from basic schools across the 16 local government areas of the state converged on the premises of the State Universal Basic Education Board (SUBEB), Okesa, Ado-Ekiti, where they displayed their vocational skills at the 2nd edition of the Public Primary Schools’ Trade Fair.
At the exhibition were: Deputy Governor Prof Modupe Adelabu, who doubles as the SUBEB chairman, the wife of Ekiti State, Bisi Fayemi, who was the Mother of the Day; Osun State Deputy Governor, Otunba Titi Laoye-Tomori, who was Special Guest of Honour and represented by the Permanent Secretary, Osun SUBEB, Alhaji Fatai Kolawole and Chief Julius Ajayi, who chaired the occasion.
Others included: Deputy Speaker, Ekiti House of Assembly, Mr Taiwo Orisalade; Education, Science & Technology Commissioner, Mr Kehinde Ojo; Commissioner for the Environment, Dr. Eniola Ajayi; Commissioner for Women Affairs & Gender Empowerment, Mrs Fola Richie-Adewusi and Special Adviser to the Governor on Political Matters, Alhaji Ayodele Jinadu.
The deputy governor assured that the government will not renege on its promise to promote entrepreneurial education at the elementary level of education as a way of encouraging budding talents to fully realise their potentials in the state.
She said the essence of the trade fair was to create a forum for pupils to showcase their entrepreneurial and technical skills that have been imparted in them in their various schools.
Her words:  “Entrepreneurial education is aimed at exposing pupils and students to those attitudes, behaviours, skills and practices (outside their usual academic works) that could equip them with the relevant skills to enable them stand on their own without necessarily running after non-existing white collar jobs after leaving schools.”
Mrs Adelabu described the trade fair as another trail-blazing concept designed by SUBEB under the well-focused and result-oriented administration of Governor Fayemi to ensure that the talents and innate skills of pupils are well harnessed to make them productive individuals to the development of the state and the nation from their
tender ages.
She lauded the giant strides of the governor in the area of basic education which according to her, has earned the state the Fountain of Knowledge appellation, adding that the Early Childhood Development Education Mega Centres built in the three senatorial districts in the state have been adjudged the best of its kind among public educational
institutions in the country.
Also speaking, Mrs Fayemi commended SUBEB for the unique initiative which has made Ekiti State a pacesetter in the Nigerian education sector.
Describing the exposition as quite laudable and helpful to the pupils and national development, she urged the Board to sustain the the trade fair and get her office more involved in the subsequent editions.
In her goodwill message through Alhaji Kolawole,  Otunba Laoye-Tomori noted that Ekiti State is reclaiming the practical aspect of education which the country has lost to protracted military rule.
She promised to domesticate the programme in the State of the Living Spring and congratulated the state on the success of the trade fair.
The Osun deputy governor said the catch-them-young spirit as displayed by the pupils at the exhibition ground was laudable and worthy of emulation.
The presentation of trophies, gift and cash to the first three council areas climaxed the exhibition.