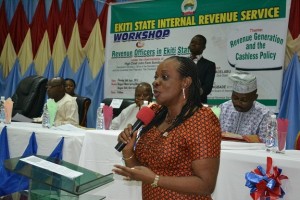 Worried by the drop in the revenue accruing to states from the federation account, Ekiti State government is stepping up actions to harness its abundant natural and human resources to shore up its Internally Generated Revenue (IGR).

The decision to create new revenue sources was taken yesterday at a workshop organized for revenue officers from the state and local government areas at the Ikogosi Warm Spring Resort Centre, Ikogosi–Ekiti.

It (workshop) came on the heels of a similar session organized at the same venue on Tuesday for accounting officers in Ministries, Departments and Agencies (MDAs).

Deputy Governor Prof. Modupe Adelabu, who chaired the Tuesday session, made an opening remark at the workshop for revenue officers yesterday.

She noted that such interactions became necessary especially now that available funds have become grossly inadequate to meet government’s obligation to the people.

According to her, the Governor Kayode Fayemi-led administration requires enormous resources to implement its Eight-Point Agenda which is the road map to socio-economic recovery of Ekiti State.

Her words: “It is the belief of this administration that we are not destined to be poor… as Ekiti State is blessed with abundant human and natural resources, capable of fast-tracking its development if adequately harnessed.”

She therefore charged the Ekiti State Internal Revenue Service (EKIRS) to re-strategize and effectively collaborate with all the 16 local government areas in the state with the aim of improving the IGR.

Urging EKIRS to address the issue of multiplicity of taxes in conjunction with the local government authorities, Mrs Adelabu advised the body to create more awareness on taxation to change the people’s perception of revenue officers and reawaken them to their civic responsibilities.

In his own remarks, the Chairman of EKIRS, Mr. Isola Akingbade lauded the administration for the logistics support given to the body at its onset which enabled it commence the e-payment and put other machineries in place to reduce cases of loss of revenue, revenue flight and other sundry abuses that had previously sabotaged government’s effort to widen its IGR base.

He appealed to everybody to see the business of revenue collection as a collective responsibility, if the people must continue to enjoy the dividends of democracy which can only come through improved and enhanced IGR.

“Every naira and kobo counts, therefore play your part by paying your taxes appropriately”, he concluded.