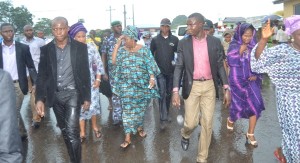 Erelu Bisi Fayemi being led to Oja Bisi under heavy rain during her outreach programme in Ado-Ekiti.

The light showers experienced in Ikere-Ekiti, which gave way to the torrential rain that fell in Ado-Ekiti, did not deter the Wife of the Governor, Erelu Bisi Fayemi, from continuing with the Erelu Be Oja Wo (Market Outreach) programme to the two local governments, on Monday.

The heavens opened when the governor’s wife arrived at Oja Bisi, Ado-Ekiti, shortly after departing Ewi’s palace, but she remained unperturbed as she stood in the rain to address the jubilant market women, as well as community and political leaders who turned out in large numbers.

Shunning the umbrella all through the programme, the governor’s wife declared, ‘If my people are inside the rain drenched and they are still in this joyous mood, dancing just to receive me, why should I act as if I’m from a different planet. We will stay in the rain together.’

And true to her words, she stayed in the rain and danced with the different women groups who turned out in different uniforms and customized T Shirts to witness the event.

The governor’s wife said that the visit was in the furtherance of her tour of markets in the 16 local government areas of the state to empower traders with cash grants to boost their businesses and to present a bus to each of the markets in the LGs headquarters.

She explained that the programme was supported by Governor Kayode Fayemi, state ministry of women affairs, social development and gender empowerment, the 16 LG chairmen and the Ekiti Development Foundation.

Due to its largeness and status as the state capital, she stressed that her tour of the markets in Ado-Ekiti would take three days, unlike the one day that was devoted to other markets.

She admonished the traders to spend the money for the purpose it was given and to refrain from using the grant to buy aso ebi, adding that it was not meant to be shared and spent on frivolities.

Thanking the governor’s wife for her thoughtfulness, the founder of the market, Chief Bisi Egbeyemi, said since he was not clairvoyant he did not know that the market would grow to a major commercial hub it had become today.

Urging the governor’s wife not to relent in her good deeds, he said that history would remember her as the first wife of a governor to identify with the grassroots, with an unflinching support for the socio-economic cause of women in particular.

Done with speeches, the governor’s wife again defied the rain as she moved round Oja Bisi to purchase commodities.

This was just as the Ewi of Ado-Ekiti, Oba Adeyemo Adejugbe, conferred the chieftaincy title of Ajiseye of Ado-Ekiti, on the governor’s wife during a visit to the palace, on Monday.

Oba Adejugbe said that the honour was in appreciation of the tireless efforts of Erelu Bisi Fayemi to turn the fortunes of Ekiti women around, at a pace and vigour never witnessed before.  He said that the chieftaincy title would be formalized before the end of the year.

In the course of touring markets across the 16 local government areas of the state, the governor’s wife had been conferred with the traditional titles of Olu Omo of Ikole-Ekiti and Yeyelaje of Igede.

On Monday, the governor’s wife had first visited the Oja Oba Ikere for the outreach programme, where she paid homage to the traditional ruler, Oba Adegoke Adegboye.

The monarch had on August 4, 2013 bestowed the title of Atayese of Ikere land on Erelu Bisi Fayemi, during the Ijesu Festival of the town. The formal installation is also expected to take place before the end of the year.

In an address during Monday’s visit, Oba Adegboye did not mince words in saying that Governor Kayode Fayemi had his blessings and support for his second term bid in office, given his unprecedented achievements so far.

He was optimistic that Ikere would have been transformed to ‘small London’ by the time the governor spent eight years in office, judging by the pace of ongoing infrastructural development.

A bus was donated to the market women in Ikere LG, while Erelu Bisi Fayemi said that the one meant for Ado-Ekiti LG would be presented during the grand finale of the tour on October 3 at Oja Oba, in Ado-Ekiti.    In addition to the cash grant, the Iyalojas also received plastic bowls, waist band pouch (Opoo), at each of the markets.