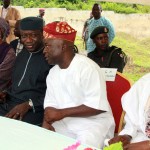 Ekiti State Governor, Dr Kayode Fayemi has thrown the allegation of financial misappropriation levelled against him by the opposition party in the State in the waste bin saying that he is not moved by lies and blackmails of the opposition politicians.

Fayemi who was addressing a mammoth crowd of citizens who had come to welcome him during his tour of Ekameta, Efon, Okemesi/Ido- Ile, Ijero and Irede Council areas on Wednesday, stated that he had kept a clean record as governor in the State. He added that the opposition’s accusations that he is stealing from the State treasury does not hold water.

The Governor stressed that if he had done any shady deal that could warrant been harassed by the opposition, the ruling Peoples Democratic Party at the national level would have sent the Economic and Financial Crimes Commission (EFCC) in his trail.

Dr. Fayemi said he was aware of some of his colleagues who are being blackmailed and could not leave their political parties because they were scared of being exposed for the corruption that they have penetrated.

He stressed that as an opposition Governor, he was a target for the ruling party but could not be trapped because he ran government with heads high.

” I am the only Governor who declared his assets and  published in adverts. So if you want to accuse someone like me, you must be on very sure footing because I am from the opposition party. So if I don’t stand on very sure footing, you know what blackmail does in government. I have colleagues who are being blackmailed and cannot even leave the parties they are in because they know what would come up if they do that. They also know me, if they have anything on me, they would have exposed it, EFCC would have been swarming all over this State, and it is a statement that EFCC has not come here for once since the four years of this administration. If they find me a corrupt person or a criminal, this is so easy you will find out easily”, Fayemi said.

The Governor said the opposition is as good as been ignored because their allegations are mere figment of imaginations since the real figure of how much the State earns from the federal allocation is on the website of the Federal Ministry of Finance and cannot be altered.

Fayemi challenged the opposition to carry out an objective audit of the State account should they be sure that the State purse is being tampered with, rather than mislead the people to achieve their own interest.

He stated that many of the oil producing States have not been able to match up with the development that his administration has brought to Ekiti in spite of the meager resources that accrue to to the State.

The Governor whose speech was corroborated by some of the citizens who spoke to journalists said his administration has executed no fewer than 1000 projects since he came on board in 2010 and has consistently paid the wage bill which gulps more than 75% of the resources that accrue to the State from the federal government.

“I always tell the media this and I still stand on this: facts are sacred, opinion is free. Anybody can open their mouth and of course if you go on the internet, people say all sort of things because are not held responsible for what they say. You cannot be challenged on the internet, you can even call yourself anything, nobody would know what you are saying and who you are in order to hold you to account. I have just told you and it is not Fayemi’s information. If you go to website of the Federal Ministry of Finance, you can calculate between October 2010 to date what has come to Ekiti in terms of federal allocation. It is not a figment of imagination, it is something that any independent journalist can find out, and then you can calculate on the basis of what you see.

What is the wage bill of Ekiti on a monthly basis? What is the operational cost of Ekiti? By the time you finish that calculation, you would come back to ask me what is the magic, how have you done it? How have you managed to run the State without it collapsing? Many of the oil producing States have not been able to do what we are doing in the last four years, yet development projects have not stopped. As you can see what we have just done here in this local government. This project is all over Ekiti State. Over a thousand projects have been accomplished in Ekiti since we came on board”, he said.

The Governor who reiterated his stance on allegation of founding a private University with funds meant for the State added that anyone who has evidence of such allegation should come up and challenge him.