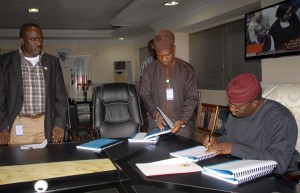 Ekiti State Governor, Dr Kayode Fayemi has signed the State Water and Sanitation Law, with an assurance to increase access to portable water to 80% by 2014.

Signing the law in Ado Ekiti in Ado-Ekiti, the Governor reiterated the commitment of his administration to laying a solid foundation for the efficient management of a functional water supply and sanitation sector in the State.

Fayemi explained that one of the provisions of the Infrastructure Development Agenda is to make all the water supply schemes in the state functional in order to increase access to potable water supply from 40% which it was in 2010 to 80% next year; adding that access to potable water is crucial to public health and wellbeing of the people.
The Governor also highlighted that aside constructing mini water schemes, Government is rehabilitating old ones to make them functional. This, he said, would enable all the nooks and crannies of the State to have potable water.

He said : “We have repaired two of Ero Dam low lift pumps and installed powerful generators to increase its water production capacity. We have upgraded Aramoko Booster station with pumps and generators to support the boosting of water supply to nearby communities. We are embarking on feasibility study for the rehabilitation of Ero and Itapaji river water supply scheme in order to enhance our prospects of receiving support from Development partners. we will be able to put the schemes on a sound footing to meet water supply needs of up to 10 local governments or over 60% of the State population”.

While stating that most of government’s programmes in the sector are implemented through budgetary provisions, the Governor  said concerted efforts are on to attract Development Partners and the private sector in public-private partnership to construct new schemes, rehabilitate existing ones and establish best management practices.

Dr. Fayemi disclosed that efforts in this regard is already yielding results as the State was one of the 3 states selected to participate in the 3rd National Urban Water Sector Reform programme of the World Bank, and one of the 3 States approved to participate in the Water Supply and Sanitation Sector Reform programme of the European Union while the EU and UNICEF have started series of intervention programmes in the State.

He said that the new law which has inputs from various stakeholders in the society, was formulated following extensive consultations with all stakeholders in line with the administration’s Governance agenda of transparency and inclusiveness.

With the new law, Ekiti now becomes the second State in Nigeria to pass a Water Supply and Sanitation law in accordance with international standards.