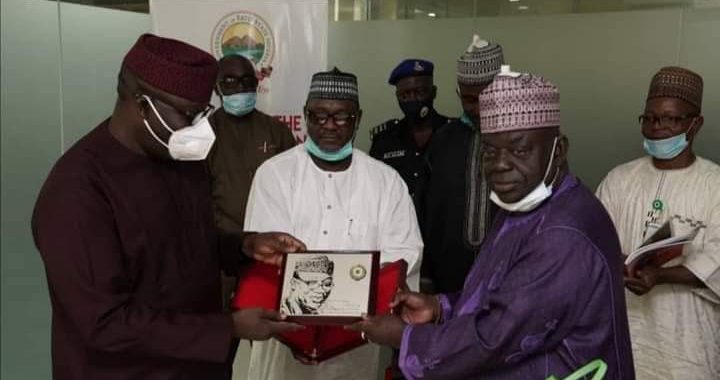 The Governor of Ekiti State, Dr. Kayode Fayemi has called on the Federal Government to sharpen its intelligence collection and tackle the root causes of insecurity in the country including poverty, unemployment, under-employment, and lack of adequate education.

Governor Fayemi who noted that everyone in the country is feeling the pang of insecurity in one form or the other, said government needed to get to the roots of the menace of insecurity nationally in a bid to effectively address it.

Dr. Fayemi stated this in Ado-Ekiti on Monday when he received members of the Board of Trustees of the Sir Ahmadu Bello Memorial Foundation, led by its Chairman and former Governor of Niger State, Dr. Mu’azu Babangida Aliyu, in his office.

The Chairman of Nigeria Governors’ Forum said while intelligence gathering and sharing amongst relevant security agencies was important, addressing other sociological factors like poverty, unemployment and lack of adequate education are critical.

He said the NGF would continue to engage the Federal Government to ensure that the country was safe for all.

“We are all feeling the pang of insecurity in Nigeria, whatever we can do as a nation, nobody is interested in your excuses, once you are governor, you are in charge of the security of your people, so whatever you can do to ensure that you deliver the goods to them in terms of security, you have to do it.

“And we are constantly engaging the federal authority on this, that they should ensure that we develop a framework that would sharpen intelligence collection and also begin to address not just insecurity but the causes of insecurity and we all know the origin and causes of insecurity, poverty is a big issue, lack of education, lack of employment, under-employment, all these factors are critical, so we cannot just look at security on the surface, we must address the sociological underpinnings of insecurity and then work out precisely what we must do.” Governor Fayemi said.

Speaking further, the governor, who posited that education remained the greatest antidote to poverty, said education should be refocused at the national level due to its importance to national development.

“Education in Nigeria should be treated nationally. It requires a national approach, it cannot just be isolated state by state, and particularly for a regulatory purpose, in terms of standard of the curriculum and terms of supervisory engagement. We need to do things that will make us appear as if cherish the importance of education in the lives of our citizens. The governor noted.

He said his administration has done a lot to improve education in the state including abolishing all forms of fee payment up to Senior Secondary three, payment of running grants to schools as well as equipping the system for better service delivery.

On the lingering strike action by the Academic Staff Union of Universities (ASUU), Dr. Fayemi urged the Federal Government and relevant stakeholders in the education sector to have an urgent engagement with the leadership of ASUU to bring an end to the current impasse.

He also urged the lecturers to look at the hardship the students and their parents are going through in view of the strike that has kept the students at home for over seven months.

“Whatever the areas are, we would like to engage them, not as Federal Government but as concerned parties at the level of government who feel that we can still work out an arrangement in which you don’t completely dictate to your employer how he pays your salaries.

“If agreement has been entered into and if it is not going to be honoured, you owe a duty to urge other parties to review it consensually and then come up with something that is mutually acceptable to both sides.

Dr. Fayemi said he was glad to see the Sir Ahmadu Bello Memorial Foundation carrying on with the vision of the late leader and working with the governors in Northern Nigeria particularly and across the country, in general, to begin to find ways to refocus energy on education, which is the antidote to poverty.

Earlier, Dr. Babangida Aliyu had told the Governor that the Foundation was established as an instrument for the promotion of the ideals of Sir Ahmadu Bello and to promote the development of Northern Nigeria which prompted the foundation to commission research in support of efforts to improve education in the region.

The former Governor berated the high level of out-of-school children in the North and posited that the problem of education in the North requires a national approach. He, therefore, called on the Governor in his capacity as the Chairman of the Nigeria Governors’ Forum to spearhead the formation of an endowment fund to revamp education in the North, believing that the effort would go a long way to bridge the divide and erase some acrimonious feelings.

The former governor also urged Dr. Fayemi to urgently address the cankerworm of general insecurity, gender-based violence, and education deficit in the North urging him to also call on well-meaning northerners and Nigerians including policy makers to have a careful look at these issues with a view to making an adequate policies that would take care of it.