Featured, NewsOur Investment In Education Is Paying Off, Says Fayemi

Our Investment In Education Is Paying Off, Says Fayemi 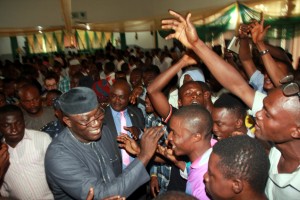 Ekiti State Governor, Dr Kayode Fayemi has said that his administration’s huge investment in the education sector has started yielding the desired result, adding that everything would be done to ensure that the state returns to its number one position in the area of education in the country.

The Governor  disclosed this during an interactive session with leaders of Ekiti indigenous students associations at the Jibowu Hall, Government House, Ado-Ekiti.

The students leaders numbering about 400 had engaged the Governor on sundry issues bordering on education development in the state, including bursary awards, scholarships, return of Students Union government to some schools, ongoing ASUU strike, Ekiti government’s e-school project as well as teaching quality in schools.

The Governor who expressed confidence at the improvement in education standard in the state, said his administration’s investment in the education sector is now paying.

Governor Fayemi specifically cited the just released result of the West African Examination Council (WAEC) SSCE, where the state’s public schools  recorded  about 70 per cent pass as against 9 per cent recorded in same exam last year. He pointed out that some of the  schools  recorded 100% excellent performance, while there were significant improvement in many subject areas.

The Governor said that the remarkable performance of the students was as a result of the commitment on the part of the teachers and the various interventions of the government in education including the computer-per child initiative, comprehensive renovation of all schools and the creation of conducive atmosphere for learning as well as various forms of motivations for both teachers and students.

He said efforts are also being made to ensure and maintain high standards in the various tertiary institutions in the state, adding that that had started with an improvement in the ratings of the state owned university.

On the running of the State-owned University, the Governor stated that his administration is unparalleled in funding the institution even as the varsity for the first time now gets capital grant while a sum of  N100,000,000 (One hundred Million Naira) had just been released for the accreditation of the University’s College of Medicine.

He stressed that the investment in the education sector is not to curry favour from anyone but a rightful duty to the future of the State.

While insisting that tuition is not more than N50,000 at the varsity as he had declared in 2010, the Governor explained that tuition is only a part of the school fee which comprises other sundry fees that are either compulsory or  optional depending on the nature of such fees and the course a student offers.

Fayemi asserted that the University has its autonomy and would not interfere in how it is being managed except on the grounds of his invitation to perform his duties as Visitor to the school.

The Governor also appealed to members of the striking Non Academic Staff Union of Universities, Ekiti State University chapter to shelve their on-going industrial action and pay up their taxes in accordance with the tax regime in the nation’s Tax Act.

He disclosed that the new tax regime does not exempt governors as he also pays tax accordingly.

He lamented underpayment of tax by about 2,000 workers of the institution who pay N2million against the N45million which is the assessment done by the Joint Tax Board.

The Governor stated that the Joint Tax Board had written to the State Government and the authorities of the institution that it has not granted tax exemption to any staff of the tertiary institutions in the state.

“On NASU, in the first instance I think the strike that NASU has embarked on is an illegal strike in Ekiti . They claim that government has imposed excessive tax on them. This government has no business with tax. Tax in Nigeria is a federal law. Ekiti state government does not have an income tax law. We subscribe to the tax law that has been put in place by the Federal Inland Revenue Service according to the personal income tax law of 2012 by the federal government of Nigeria. Everything that Ekiti state implements comes from the federal law”, he explained.