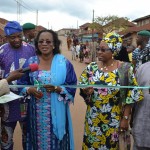 The strategic implementation of the Eight-Point Agenda of the Governor Kayode Fayemi administration continued yesterday to draw encomiums from communities across Ekiti States, even as the governor visited three local government areas and a Local Council Development Area (LCDA).
The visit, led by the Deputy Governor, Prof Modupe Adelabu, was in continuation of his “Thank You” tour of council areas in the Land of Honour State to appreciate the support enjoyed by his government in the past four years.
On the visitation train were: the governor’s wife, Bisi, House of Assembly Speaker, Dr. Adewale Omirin, commissioners and state lawmakers.
Residents at Emure, Ise/Orun, Ikere local government areas and Ikere West LCDA described the developments witnessed in their domains under the Fayemi-led administration as unprecedented since the creation of the state 18 years ago.
Through their monarchs and community leaders, the residents said the governor’s achievements “are unforgettable legacies that will outlive the governor himself.”

In Emure-Ekiti, the monarch, Oba Adebayo Adebowale commended the governor for embarking on social infrastructure development in all communities and the faithful implementation of the Eight-Point Agenda.
He expressed the appreciation of his community to the Governor Fayemi-led administration for supporting the construction of an ultra-modern museum in the town.
Also speaking, the Caretaker Chairman of Ikere Local Government, Mr. Ayodele Oluwafemi described the lofty achievements of the governor since he assumed office on October 16, 2010 as worthy of commendation, saying such feats will remain indelible.
While inaugurating projects in all the council areas the governor said his visit was not only to thank them for their support and cooperation in the last four years, but also to give the account of his stewardship because he was confident that his administration has delivered on its promises.
His words: “Seven years ago or thereabout, we were here to canvass for your votes and made some promises which by the grace of God we have the confidence to return to you to say we have delivered on those promises.”
He thanked the people for their unalloyed support without which his government would not have been able to record the achievements.
The projects commissioned include; ICT Centre at Orija High School, Emure-Ekiti, a five-kilometre road at Oluti-Arigidi Street, Ise-Ekiti, a Library Complex at Ikere-Ekiti, an ultra-modern market complex and stalls at Oja Oba Market, Ikere-Ekiti and another five-kilometre road at Idi Isin-Ilawe Street, also in Ikere-Ekiti.