We Are Ready For 2015, APC Tells Nigerians 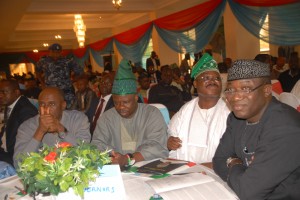 Nigeria’s main opposition party, the All Progressives Congress (APC) has told Nigerians that the party is poised to give the country purposeful leadership come 2015.

This was the summary of the first Progressives Governance Lecture organised by the Progressive Governors Forum (PGF). The lecture tagged “unemployment and the crisis of governance in Nigeria: the way forward” held in Ibadan on Monday.

Giving the highlights of Policy Recommendations and way forward on the theme, Ekiti State Governor and Chair Governance Steering Committee of the PGF, Dr Kayode Fayemi, said the lecture series was aimed at examining the challenges besetting the country and proffering solutions.

The Governor  who added that the APC is a party of difference and development stated that the struggle of the party is “not the survival of the fittest but to pull up the weak and vulnerable” in the society.

Fayemi while assuring Nigerians of a better country asserted that the 2015 election is going to be a replica of the biblical battle between David and Goliath but the party  relies on the people’s support.

The Governor  noted that there is a connection between unemployment and governance and  identified insecurity and unemployment as main problems in Nigeria, saying that latter breeds the former.

He stressed that the APC owes it a duty rather than a favor to empower the people hence the first attack on unemployment.

Commenting on the former PDP Governors who are now in APC, Fayemi said the governors share the same ideologies with the APC even as they pursue similar policies aimed at employment generation.

Recalling some of the points raised by discussants that unemployment and poverty are the root cause of insecurity in the North, the Committee chairman said the incessant killing in the North proves that the Federal Government either has “no capacity or low capacity” to address the security challenge.

Fayemi wrapped it up by urging Nigerians to examine the present situation of the country ahead of the February 2015 general elections, saying it is theirs to challenge  and throw out a non performing government.

Earlier, the guest lecturer, Dr Ayo Teriba, had raised some posers for government, stressing the need to do something to halt the growing spate of unemployment in the country as a way to stem insecurity.

In his remarks, the Chairman of the PGF and. Governor of Imo State, Owelle Rochas Okorocha stated that the unemployment situation in Nigeria is unacceptable and has become a major setback for the country despite the resources it is blessed with.

Okorocha added that it is the vision of the APC to tackle unemployment by strengthening democratic process and promoting the core values of justice.

The lecture was preceded by a rally at Lekan Salami Stadium where thousands of APC members trooped out to welcome the party leaders.